Developing applied research useful to the fight against terrorism implies associating the best contributors, both academically and operationally, and covering a broad spectrum, from the anticipation of terrorist acts to the confrontation and then to all forms of post-attack resilience.

The contributors are in line with this logic of seeking scientific excellence with an operational vocation and illustrate the variety and high level of thinking that CELT strives to federate in order to contribute to the fight against terrorism undertaken by France.

This colloquium follows the publication of the special issue of the journal Défense et Sécurité Internationale (No. 47, April 2016) and marks the first in a series of scientific events that CELT will organise in order to carry out an ambitious long-term work programme.

The proceedings of the conference are published in the book Lutter contre le terrorisme (Fighting Terrorism), published by Economica.

In 2012, the research centre of the Saint-Cyr Coëtquidan schools (CREC), the journal Inflexions, and Dr Jean-Michel Le Masson, head of the zonal health service of the general secretariat for the administration of the Ministry of the Interior, launched an ambitious research programme devoted to invisible injuries. A first symposium was organised in October 2012. Incorporating a psycho-social approach to psychological war trauma, it has made it possible to draw up a precise inventory of the situation and encouraged better consideration of psychological injuries. A second symposium in November 2014, focusing on resilience, opened the debate to institutions and companies facing the same issues.
This third scientific event, supported by the Centre of Expertise “Fight against Terrorism” (CELT) and the Chair “Ethics of Decision” aims to address acts of terrorism and its psychological consequences, especially after the attacks of 2015 and 2016 in France.

The management of the attacks, medical and psychological care, institutional care and legal and financial compensation will be discussed in turn. An approach to radicalisation factors and resilience will conclude the debates.

The proceedings of the conference are published in the book Blessures invisibles et terrorisme, published by Economica. 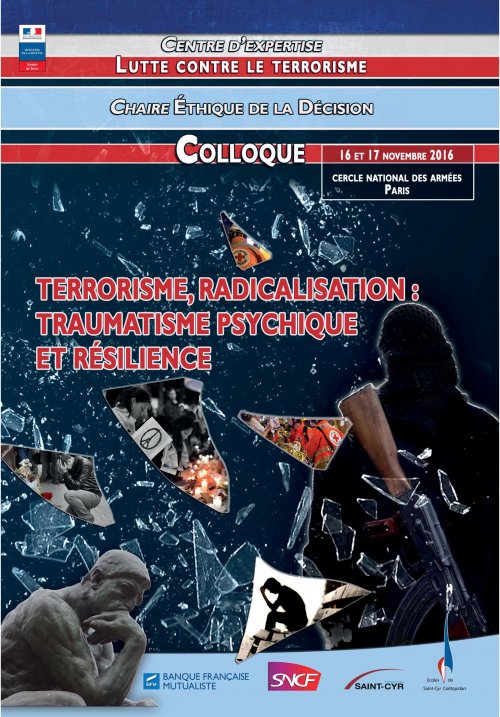